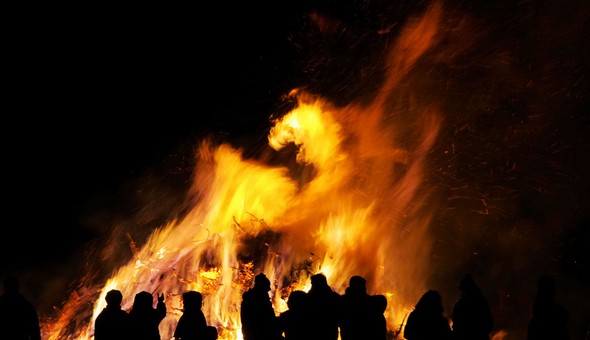 The Bonfires of San Juan, one of the biggest celebrations in Alicante takes place during the middle of June, when all the streets fill with emotion, fireworks and bonfires. Thousands of people cross the municipal to see the opening show; a truly memorable event that awakes the most traditional spirit of these lands like no other. With a large history backing it, the celebrations are the result of centuries upon centuries of tradition, with each element representing part of that history such as the ” Bellea del Foc “, or the always up roaring mascletà. Nothing can compare to the beauty or symbolic meaning of this event, making it one of the best Alicante has to offer.

A Celebration Dowsed In History

The bonfires find their origins in the agricultural region of times past, when the people of Alicante celebrated the shortest night of the year with meals cooked on an open fire, symbolic dances and other rituals, which today are now almost forgotten. With the passing of the years, this celebration began to grow with the municipal gaining a following and popularity never before seen. As a consequence of this, during the XIX century, the city town hall closed the bonfires, fire crackers and other acts that were already commonplace between the 20th and 24th of June. Before the oversights of 1881, the population would demand a the return of the celebration which, thanks to its traditional value and growing social presence, would officially start again in 1928. José María Py would be one of the strongest supporters stating «We should give the bonfires that same character that has been given to the Valencian Fallas».

During the XX century, some of the most symbolic elements would be added to these celebrations such as la plantá, la cremá, la mascletá, which would be celebrated until the Civil War; fortunately in 1940, they would return with rekindled spirit.

One of the main hallmarks of the celebration is the aforementioned plantá , the moment they raise the bonfires – an act that can represent symbols, satire etc. To keep up with the hard work, the collaborators feast on coca amb tonyina, a local delicacy that is always in good supply. After the traditional delivery of prizes, the folkloric parade and other events, the cremá brings the bonfires to a dazzling conclusion when Fireworks light the sky, firecrackers echo within the streets, and the fires finally die down. Gunpowder, also plays an important role, as we can see with the mascletà – an act in which thousands of fire crackers are set off at the same time, producing a unique almost orchestral sounding effect, all of this being topped off with unique artistic figurines scattered throughout the streets giving an ironic contrast to this serious event.

Few celebrations in the Costa Blanca provoke such emotion, traditional value and combine it into an awe inspiring show as the Bonfires of San Juan, when each year the streets of Alicante are filled with the unique colors and sounds of crackling bonfires – Yet another reason to come visit this Mediterranean paradise.