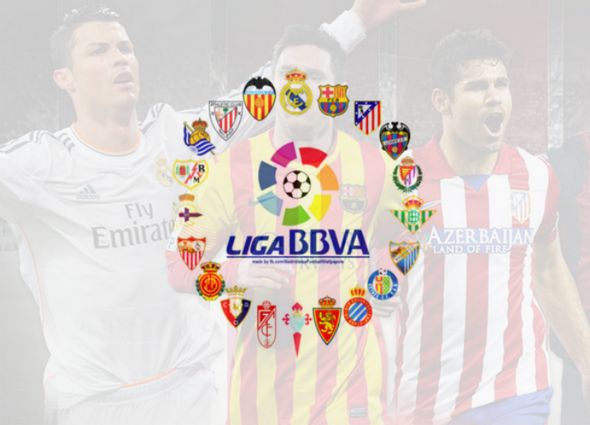 Tradition, spectacle and a lot of history; The Liga Española de Futbol (Spanish Football League, now officially known as the Liga BBVA) is one of the most prestigious sports competitions in Europe and the most important football league in the world since 2010, as stated by IFFHS. Amongst its almost 90 years of history, we can find an infinity of curiosities and facts which have made an indentation on the history of this event such as the classic Barcelona vs. Real Madrid matches, controversies and the first goals ever to be scored – Lets discover some of them! The Liga Española de Futbol was founded on the 10th of February, 1929, with a showdown between the RCD Español and Real Unión, with Catalan José Pitus Prat going down in history as the first person to ever score a goal, however history states that a friendly match took place in 1890 in the Hipódromo de la Sociedad de Carreras de Caballos, in Sevilla, pitting Huelva RC against Sevilla FC; A football player from the ‘Rojiblancos’ called Ritson would be the first player to score a goal in the match, however he is now long forgotten in history.

Despite being one of the first Spanish clubs to integrate foreign players into their lineup, the controversial season of 1911/12 would forever change the policy of player signings for the Ahletic Club. Since then, its staff has been limited to players born or raised in Euskadi, raising suspicions, criticisms and accusations of racism at the start of the 21st century, however the presence of players such as Iñaki Williams, Jonás Ramalho and many others proves that it’s not an issue regarding race, but identity.

Clubs That Have Never Dropped In Rank

Every club, including European giants such as Arsenal, the Juventus and the Bayern de Múnich, have all fallen in the ranks on some occasion, however the Athletic Club, Real Madrid and Barcelona have never dropped to the Second Division – Something that every fan of the aforementioned clubs boast with pride.

The ‘Clásico’ – So Much More Than A Match

The Chelsea-Arsenal, Milan-Inter and the derby between Valencia CF and Levante U.D are some of the most exciting and explosive European football matches, however there is only one showdown which is guaranteed to get the attention of football fans; The ‘Classic’ pits FC Barcelona against Real Madrid, and what ensues is a showdown of great performance and entertainment that completely transcends the football pitch – In fact it’s popularity has spread to over five separate continents and has become known as the ‘Game of The Century’ for the media. The ‘Passageway’ – Sportsmanship In Its Upmost Glory

One of the most admirable traditions of the Liga Española is the so called ‘Passageway’; In 1970, when Atletico Madrid won the league season title, Athletic de Biblao decided to recognize and admire the champions forming a corridor to the exit of the locker room, a gesture of deep respect and sportsmanship that would once again be adopted by Barça and Madrid in 1988, 1991 and 2008.

Play-Offs In The Liga Española?

The season of 1986/87 is remembered as one of the most anecdotal of the League, since both the first and last positions were decided by knockout; This kind of ‘Play-off’, unconventional in the football world, would find a winner in Madrid player Leo Beenhakker – This experiment however, was never again repeated, so it’s safe to say it did not have a great reception.

A Tourist Attraction Which Captivates Both Natives and Foreigners

The Liga Española and especially the ‘Clásico’ have become the main attractions of Spanish culture, soaring way above Flamenco and bullfighting which both enamored Hemmingway; With the presence of over 170 countries and excellent sports performances from clubs such as Barsa, Madrid, Valencia and the Athletic, its easy to see why Spanish football captivates the international public both on and off of the pitch – No other sports event has reached 600 million viewers, not even the American Super bowl (111,5 million). As a result of the aforementioned, it should come as no surprise that the Liga Española forms almost 1% of the Gross Domestic Product (GDP) – An amazing feat when compared to other sports. And if that wasn’t enough, the competition generates millions of jobs, promotes the creation of stadiums, academies and summer football courses in Alicante as well as many other Spanish territories.