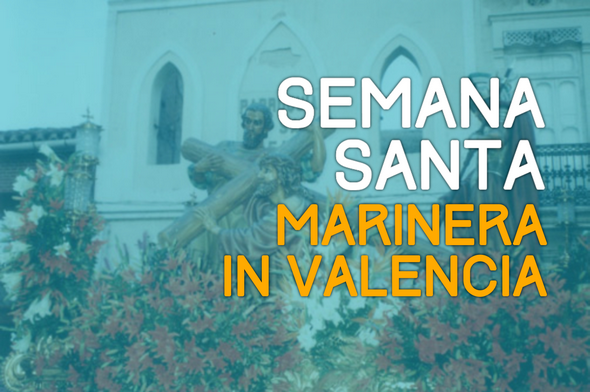 Closely related to the sea, the 2016 ‘Semana Santa Marinera’ is one of the most distinguished festivals of Valencia, being declared the most interesting festival for international tourism as is its Alicante counterpart Crevillente. For over five centuries, processions and parades set to a historical ambience have commemorated the Passion, Death and Resurrection of Jesus Christ. Whether you are religious or not, the beauty, emotion and charm of this celebration is sure to impress.

Very few festivals can provoke such excitement as the ‘Semana Santa Marinera’, with the exception being the ‘Fallas de Valencia‘ bonfire festival. Between the months of March and April, more than 30 fraternities and corporations take to the streets of La Malvarrosa, El Grao, the Cap de França, Poble Nou del Mar, El Cabanyal, and El Canyamelar; These ‘Poblats Maritims’, maritime villages, become the setting for innumerous maritime traditions, hence the origin of the name, distinguishing itself from the many other forms of ‘Semana Santa’ that can be found all over Spain.

One of the most prominent of events is ‘La Retreta’, a procession that inaugurates the start of the festivals with a drum parade from the ‘Nuestra Señora del Rosario’ church. Holy Thursday is celebrated with monuments and events such as the last supper, in which images and icons commemorating the traditional dinner of Jesus and his disciples can be visited. Good Friday represents the Burial of Jesus, where parades mourn and march in silence. Finally, Easter Sunday finishes the festival with streets being covered in a multicolored display of flowers and petals representing the meeting of The Virgin Mary and Jesus Christ. Furthermore, this celebration is a perfect opportunity to taste the typical gastronomy famous around these dates, that further enrich the Mediterranean cuisine, such as the Mona de Pascua, Arnadí, Buñuelos de Cuaresma and sweet potato cakes, amongst many others, which can also be included in the 5 gastronomic Alicante delicacies.

More Than 500 Years of The ‘Semana Santa Marinera’

Unlike other religious celebrations, Valencia’s Semana Santa finds its origins within the fisherman and sailors of its coasts, providing many of the costumes associated with this celebration, such as moving Christ to the beach etc. Historians state it’s maritime origins come as no surprise, considering the inhabitants of these ‘Poblats Maritims’, maritime villages, lived on precarious soils due to the countless dangers presented by the sea making them identifiable to biblical tragedies.

Even though the exact date is unknown, its origins can be estimated back to the XV century, when the ‘concòrdia dels disciplinants’ formed by San Vicente Ferrer, began practicing acts of penance during these dates; The ‘Hermandad del Santisimo Cristo de la Concordia’ formed in the XVII century, began celebrating important processions which would eventually lead to them becoming as famous as they are today. Valencia’s ‘Semana Santa’ as we know it now was fully created during the last century, which continues to grow to this very day thanks to the support of the Consistory of Valencia and the tireless efforts of thousands of Valencians dedicated to cultural value, religion and heritage.

If you decide to experience these festivals first-hand, you cannot forget to visit the Casa Museo museum, situated near the Puerto de Valencia, where you can find an exquisite collection of costumes, banners as well as many other historical elements – Certainly a perfect opportunity to explore the Valencia coast whilst enjoying this unforgettable festival.