Inicio » Blog » Trips » Have An Awesome Time At The Alicante Spring Festival, The EMDIV MUSIC and Many Other Valencian Music Festivals 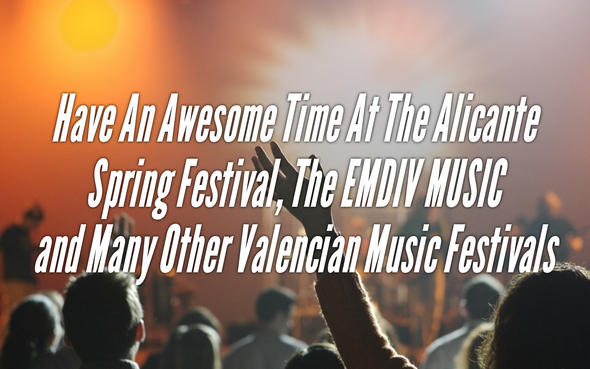 With the arrival of the summer season, the amount of fun on offer in the Comunitat Valenciana is increased by its attractions, diversity and emotion; Leaving aside museums, theme parks and historic monuments, we can find other leisure activities such as the Alicante Spring Festival, the EMDIV, the Marenostrum and the popular FIB, amongst other Valencian music festivals, that will please the ears with their awesome music and ambience. Something that cannot be missed! Each year around 10 thousand people are captivated by the most prestigious of Alicante festivals, and the first of the season, which will once again host its eighth edition comprised of electronica and indie music, amongst other genres of the highest quality. This festival is a perfect example to have an awesome time whilst trying other activities, such as the mid-day traditional giant paella feast – A perfect way to taste some Valencian cuisine. In 2016, it will take place on the 23rd of April in the Zona de Volvo del Puerto , a perfect opportunity to visit the spectacular Volvo Ocean Race Museum.

Since 1995, the Valenciana town of Benicassim has become the proud host to one of the main festivals in Spain and especially within the Comunidad Valenciana. The best pop, indie and international rock all come together on one stage which has been the host to many famous bands such as: Los Planetas, Björk, Depeche Mode, Chemical Brothers, Oasis, Radiohead and many many more. It takes place from the 14th to the 17th of July, so take note of these dates to not miss one of the most followed music festivals in all of Europe.

The most important musical festival in Elda, Alicante, is a true sanctuary for electronica, rock and roll, indie melodies and practically every genre of music; It’s humble festival poster is misleading, being a music festival that is full of personality, intensity and quality that is unheard of. Despite being fairly new – 2016 will be its fifth edition, it has already been the host to many international bands, indicating that it could have a promising future alongside the giants of Europe, such as Rock in Rio and the Glastonbury festival; Whatever the case, it takes place on the 25th of June.

On the 9th and 10th in El Grau, situated in the capital of Turia, people will dress up for the most electrifying festival that offers a remarkable set list of techno and electronica music; From the very beginning, it was the host to thirty international DJs, paving the way for future editions of the festival which is now already famous within the music festival scene. It still cannot measure up to the legendary Tommorowland in Belgium, but the thousands of people who attend the festival each year agree that it has to be envious of.

Two sets of concerts divided over four days camping is what is on offer for this event, which thousands upon thousands of people will attend to listen to Lori Meyers, Vetusta Morla and many other renowned artists. The beautiful sands of the Cullera beach will be the proud host of this astounding event that takes place from the 12th to the 14th of August – A spectacle where electronica melodies are the stars of the show.

The small town of Burriana, situated in Castellón, is proud to be the host of the biggest national festival; Crystal Fighters, Placebo and the Scissor Sisters all know what it is like to play on the shores of the Mediterranean, amongst other successful rock, indie and electronica bands. It has a camping area for more than 50,000 sounders, the name that attending members call themselves, all of which are ready for a vibrant and unforgettable experience. The El Arenal beach will be the stage for the festival from the 4th to the 7th of August.

Other festivals worth mentioning are the Low Festival, el Iboga Summer Festival and the Marearock Festival, amongst others, all of which provide the standard security, sanitary and catering services (food, drinking water, etc.) ensuring you are safe whilst having fun. The Spanish Levante is so much more than just sun and sea, the excellent music, extraordinary ambience and countless leisure activities are the characteristics of the Valencian party culture.