Inicio » Blog » Trips » Have You Heard of The Tomatina de Buñol Festival, Considered The Most Original Valencia Tradition? 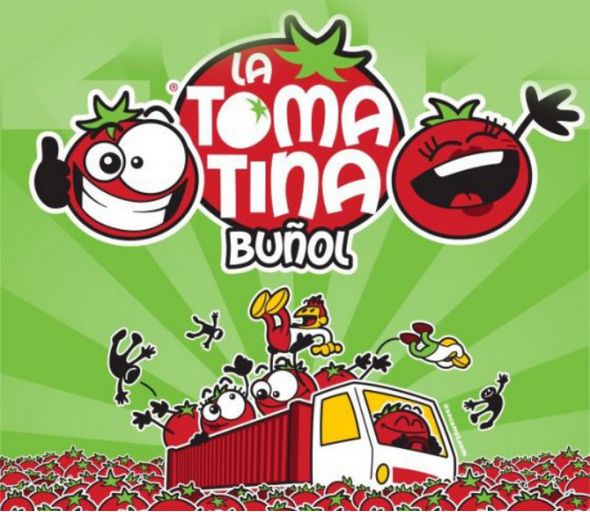 Situated less than 40 kilometers from the city of Valencia is the region of Hoya de Buñol – A land full of hills, mountains and rivers where one of the most interesting festivals takes place within Spanish territory. The Tomatina de Buñol is held each year where over 50 thousand visitors from all corners of the country gather for a tomato throwing showdown – With more than 70 years of history behind it, this spectacle hides and infinite amount of anecdotes and oddities which are all well worth discovering.

The Tomatina de Buñol is one of the main festive events on Valencia’s calendar – But what does it consist of? 60 intense minutes of chaos, in which 150,000 kilograms of tomatoes, grown in the region of Xilxes will be hurled in a frantic showdown, with the finishing touch being a mighty firecracker eruption, covering both the streets and participants in tomato juices.

What Is The Origin of La Tomatina de Buñol?

The so-called ‘Battle of the Tomatoes’ finds its origins in the summer of 1945, during the Gigantes y Cabezudos festival, in which a group of young boys trying to make their way into the parade, caused the fall of one of their comrades knocking down everything and anything in sight, provoking and enraging the crowd; Luckily for the boy and his friends, neither clubs nor fists would be their punishment, but rather a rain of tomatoes from a stand in the Plaza de Buñol, thus becoming the prototype to the Tomatina, the event we know and love today.

This event would be repeated year after year, and rapidly became as popular and integrated into tradition as the Feria de Julio and the Valencia Bonfires, although it was immediately banned by local authorities, prohibiting its celebration.

1957 would mark a before and after for the festival, when countless musicians, comedians and members of the general public organized the so-called ‘Tomato Burial’, in which a coffin covered by the vegetable would be marched around the town of Buñol with the result being the desired outcome and the celebration being legalized in 1959.

It was not until 1983 however until the popularity of this celebration would expand beyond the Valencia town due to a television report and as a direct result would trigger a staggering increase of participants in future years. 2002 marked the year it was officially crowned the International Tourist Festival, and since has set many records such as the amount of tomatoes thrown (150,000 in 2015) and number of participants (50,000 in 2007).

La Tomatina will take place yet again on the 31st of August where visitors from all over the globe such as Britain, Japan, India, Australia, Afghanistan, Kuwait, Bahrain and even the Fiji Islands, will once again participate in the tomato throwing chaos; The ‘Tomato Battle’ also presents a perfect opportunity to visit some of the more charming parts of Buñol such as the Cueva Alta, and the Museo Arqueológico Municipal museum. Other interesting celebrations also take place at this time, such as the Moors and Christians Festival, the Fiestas de Miramar and the Feria de Agosto in Játiva, all of which let you discover another side of Valencia which is often forgotten in tourism guides.