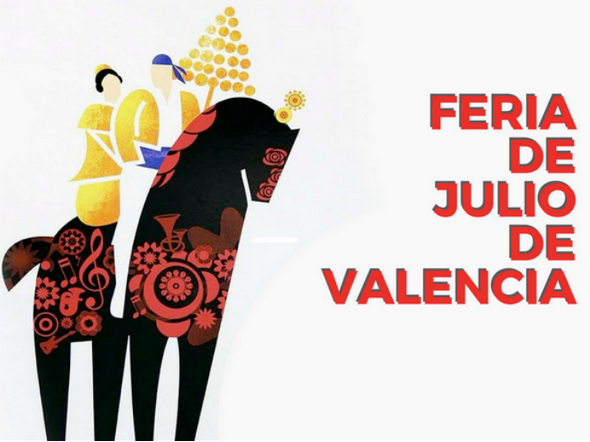 With the arrival of July, Valencia begins to vibrate with parades, pageants, fireworks, bullfights and musical performances amongst many other events, but nothing can come close to the Feria de Julio de Valencia – An event with almost 150 years of history and packed with culture, emotion and endless fun; Come and discover all its secrets! Throughout the month of July, the Plaza de Toros, el Palau de la Música, la Plaza Redonda, los Jardines del Turia, and many other locations will all be the setting for one of the biggest events on Valencia’s calendar. During this event, the city of Valencia vibrates in an explosion of colors, folklore, outdoor concerts and fireworks displays attracting thousands of visitors from all corners of the country.

Variety is the Feria de Julio de Valencia’s forte, (also known as the Gran Fira de Juliol de València) boasting plenty of activities that will cater to all ages and audiences; On the last Sunday of the month , the Batalla de Flores takes place, in which the streets are covered with a carpet of countless carnations, however the undisputed protagonists of the event are the carnival floats that circulate through La Alameda, whilst attendees shower the spectators with flowers.

As always the case, music plays an important role in this event, a prime example being the Festival de Jazz; The Palau de La Musica hosts countless concerts with masters of this genre on both a national and international level, however fans of pop and rock will be in their element at the Jardines de Vivero, which during this month becomes a monumental concert hall.

An ample amount of culture, gastronomy and fun can be found during the Gran Nit de Juliol, a very special day in which animated parades, musical performances, monologues, medieval markets, museum exhibitions and tasty Valencian gastronomy all come together.

The ‘Festival de Pirotecnia’, pyrotechnics festival, is responsible for putting the finishing touch on this program of festivities in which hundreds of fireworks are released every Saturday at midnight filling the skies – Definitely an amazing event which is sure to impress.

The Feria Valenciana – A Century and a Half of Tradition

As with other Valencian festivals such as the Moors and Christians, the Tomatina Buñol etc. the Feria de Julio is backed by a century and a half of tradition, dating back to the summer of 1871, in which the city of Valencia would erect various markets and stalls and increase the range of leisure and entertainment activities with the goal of persuading citizens to stay during summer. The first edition would be followed by many others, each time adding new elements and diversity, such as in 1886 when the ‘Certamen Internacional de Bandas de Música’ was incorporated, and in 1891 with the ‘Batlla de Flores’ – Two events which are now considered essential parts of the festival.

The ‘Feria de Julio de Valencia’ also presents a perfect opportunity to visit some of the medieval castles found in Morella and Xativa, as well as discovering the Isla de Tabarca, not forgetting of course the greens of the local golf courses, responsible for the sudden boom of golf within the region – It’s safe to say, the Costa Blanca has many things to offer for all audiences and ages.