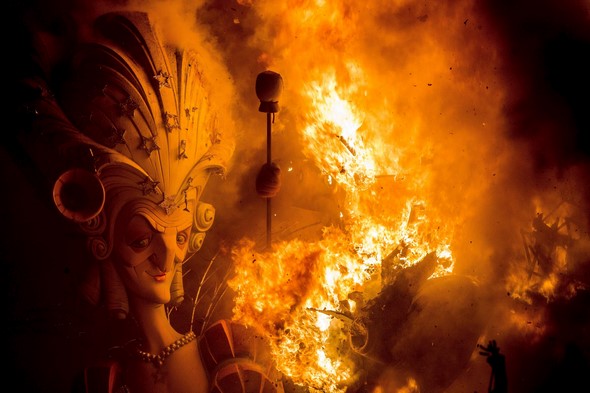 Emotion, history and lots of gunpowder all come together in one of the most symbolic and cosmopolitan Valencian events – The Falles bonfire festival; a unique festival which will once again take place in 2015, with the burning of hundreds of monuments in a strange ritual which captivates both visitors and natives alike. Being more than 250 years old, the festival has become famous on both a national and international level, and considered a Festival of International Tourist Interest – A one of a kind event that is worth learning about. Last March, around one million tourists travelled to the Levantine Coast to enjoy the Falles/Josefinas festivals, where more than 3 tons of gunpowder would cover over 700 monuments and burnt to produces flames of up to 30 metres in height. This act of unusual beauty is considered very symbolic, since it is said that the flames engulf everything vile, purifying them to be reborn in a new form.

This year the weather was an unexpected antagonist, with constant winds and rains threatening the continuity of the festivals and in some locations such as the Maritime district, the fire department had to interrupt the festivities due to security reasons, or Náquera where they decided to cease the festival all together; however most of the remaining territories continued their festivities with no problems what so ever.

The Falles of Valencia – An Incomparable Festival

As we know, Valencia has many things on offer: Delicious cuisine, an excellent atmosphere, exceptional wine routes, captivating landscapes etc. but it is also home to numerous traditional events that are highly appealing to tourists; out of all of these, the Falles Festivals are the most recognized. Carpenters, Pagans and Christians alike, all share the origins of this event; carpenters contributed to the bonfires with the waste from their spring labours; Pagans, on the other hand, celebrated a close relationship between the fires and the spring equinox, where as Christians lacked no reason to celebrate the festival considering the Catholic calendar. Even though it is suspected the festivals have been celebrated for centuries, the first records of these celebrations date back to around 1740. In 1784, the burning of bonfires within towns was prohibited and thus the festivities would come to a halt until the 20th century, where the artistic and symbolic value of these bonfires would finally be appreciated, and a central bonfire would be erected as a celebration.

As time has passed, the festivals have been enriched with more contents, and during the Semana Fallera, there is no short of activities and celebrations to take part in. During the famous Plantá, massive festival floats roam the streets, mesmerizing fireworks and the Nit del Foc, amongst many others are just some of the things on offer. First time visitors are always shocked by the Mascletá, in which thousands of firecrackers are set off at the same time, reaching up to 120 decibels.

The efforts of a whole season of hard work are reduced to ashes in an act that is said to purify and renew the spirit of its participants, who are already thinking of new ideas for next year’s festivities. The Falles Museum is home to many Ninots, caricatures of all shapes and sizes, which is definitely worth a visit.

The fame of this event has extended beyond that of the region of Valencia, and today we can find similar events in Madrid, Ciudad Real and even the Canary Islands. The Costa Blanca however is home to the largest number of festivals and events, hence why it is considered one of the most desired hotel destinations in Europe. The Falles Festivals are a unique, cultural and entertaining festivity which is sure to shock and amaze anybody who takes part.