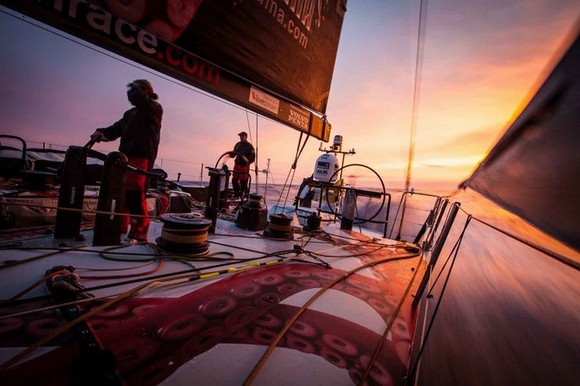 5 continents, 40,000 nautical miles, 1 challenge. The Volvo Ocean Race, one of the most prestigious maritime competitions at international level and most important trans-oceanic race, pits the most intrepid sailors against each other in a spectacular race around the world. It’s hard to miss the huge audiences that witness’ the event, being broadcast on TV as well as in newspapers ( The Daily Telegraph, Yahoo News, The New York Times, etc. ), all aspects considered, the trans global race is much more than just a competition. With more than four decades of history behind it, the Volvo Ocean Race ranks as equal to the famous America’s Cup, being one of the hardest and most demanding in its sport. Considered to be one of the most challenging because of its geography and the harsh weather conditions.

A Spanish presence has always been notable since the early years of the race, even though the competition we now know today bears little resemblance to that of the past.

During the 20th century, a competition such as this was unthinkable. The Sunday times sponsored “Golden Globe Race” in 1968, which would generate great interest among the public but would be a total disaster. Of the eight competitors that left the UK waters only Robin Knox-Johnston was successful. Despite the disastrous results a legendary event had been born.

Sometime later, when very few were prepared to repeat such a disastrous event, the Royal Navy stated its intentions of repeating and financing this competition once again; and in 1973 it was officially reinstated under the name of ‘The Whitbread Round The World Race’, thanks to the efforts of Samuel Whitbread, a member of the Royal Naval Sailing Association. The outcome astounded all. No less than fourteen teams managed to pass the finish line, in an authentic demonstration of valor, competitive spirit and the desire to overcome any obstacle, qualities which have and still are predominant in all participants who have competed in this event.

Since 2001, the sponsor changed hands and multinational Volvo took the reins. But the Spanish adventures in the Volvo Ocean Race began many years before.

During 1981-1982 Juaquín Coello captained the men of the Licor 43 to 10th and 9th positions, but it would not be the last time that the Spanish flag would sail the oceans. During the fourth edition, Javier Visiers would continue with the Fortuna Light, placing 6th. But glory however would not come until 2012; The Galicia’93 Pescanova captained by Javier de la Gandara would take seat on the podium, ahead of renowned sailors such as American Dennis Conner and French Éric Tabarly. Whilst not placing first, it was still acknowledged as glorious, considering it’s the best result by Spanish sailors within the Volvo Ocean Race.

Since 2008, Alicante has prided itself on taking the most intense moment of the race – the starting gun shot. As always, the Spanish audience has exponentially grown during the last few years, the majority being from Alicante, considering they have participated in three editions. Though you cannot forget the hard work that sailing clubs, youth programs and summer camps put in to strengthen the sport, hoping to produce new talent.

Within the Valencian municipal, you will also find the Volvo Ocean Race Museum, a building solely dedicated to this maritime odyssey. Around 30,000 people visit annually with an array of exhibitions, an audio visual material. A visit to this museum would be of great benefit to those who are considering participating in such a global event or who have interest in nautical events.